The jaguar is the strongest and biggest cat species of America. it has a solid build, mostly yellow or tan with black spots and has strong characteristics such as big head and strong jaws. Its paws are relatively short but powerful. It uses its tail for balance when jumping.

Their eyes have round pupils and they are very capable of seeing in low light conditions. they can reach up to 30 inches in height at the shoulders and approximately 75 inches in length. The weight differs from male and female and varies between 75-200 lbs. In the wild they can become between 12- 16 years of age. It is estimated that 50% of the total population is located in Brazil.

The Bigcat week documentury about the jaguar is recorded in the Northern Pantanal, Brazil.
We as Pantanal Safaris are very honered and proud to have guided Steve Winter and Bertie Gregory from the NatGeo team for 50-days to document this amazing big cat. 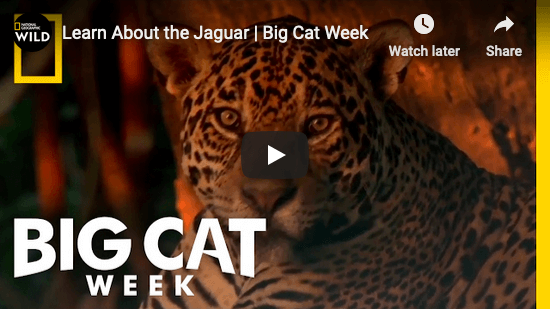 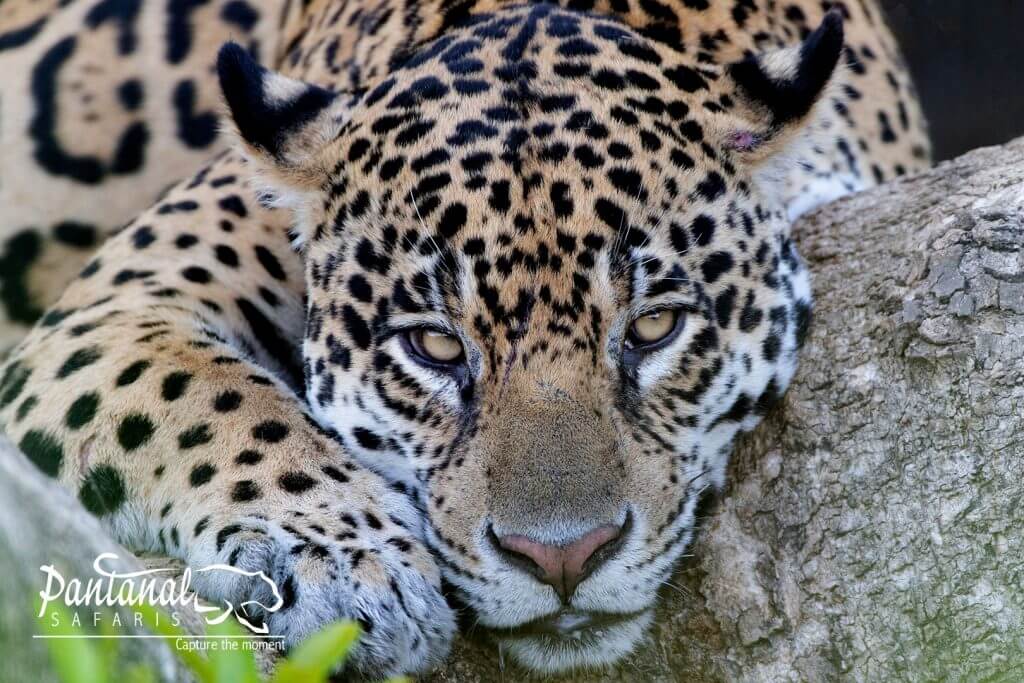 Jaguars live in a wide range of environments such as swamps, forests, rainforests, pampas grasslands and mountain areas. The jaguar has a territory that can stretch from 15- 60 square miles. Most of the times the male territory crosses territory of the females. They can be found in America although in northern America they are almost extinct. The Best place to encounter these big cats is in middle and South America, especially in the Northern Pantanal Brazil).

Jaguars are solitary animals. They live and hunt on their own. During mating season you sometimes see them together.
They excellent hunters and often patrol the riverbanks to hunt for caiman or capybara. We have seen them hunt often and many times they scout from the high ground, silently creep towards the prey and then jump on the prey and bite with their strong jaws in the neck or skull of the animal. They are amazing swimmers and move easily through water. 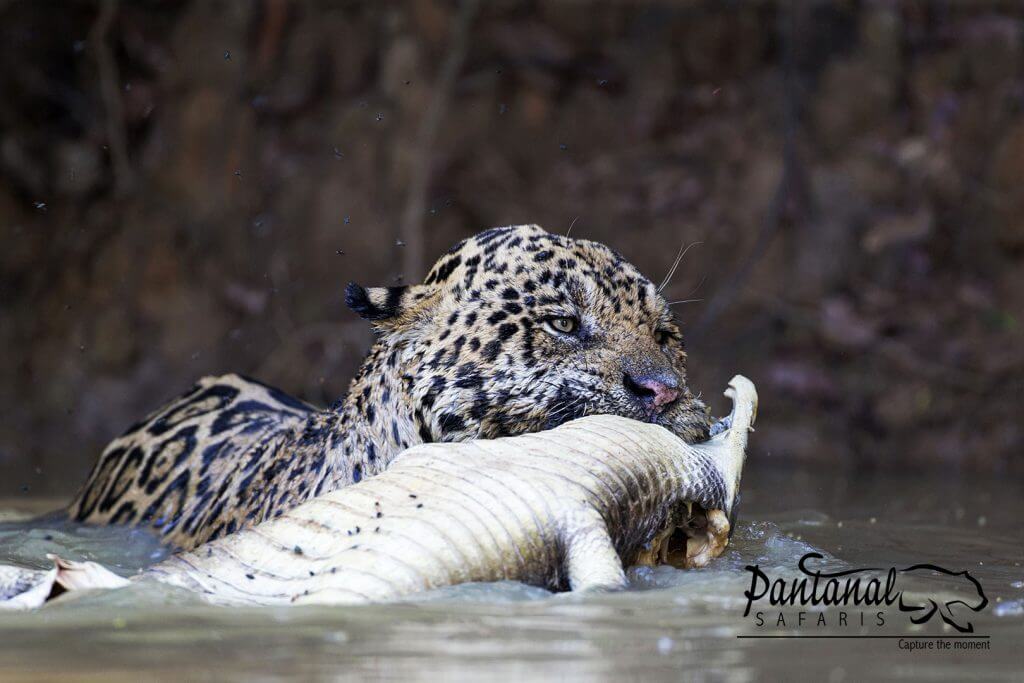 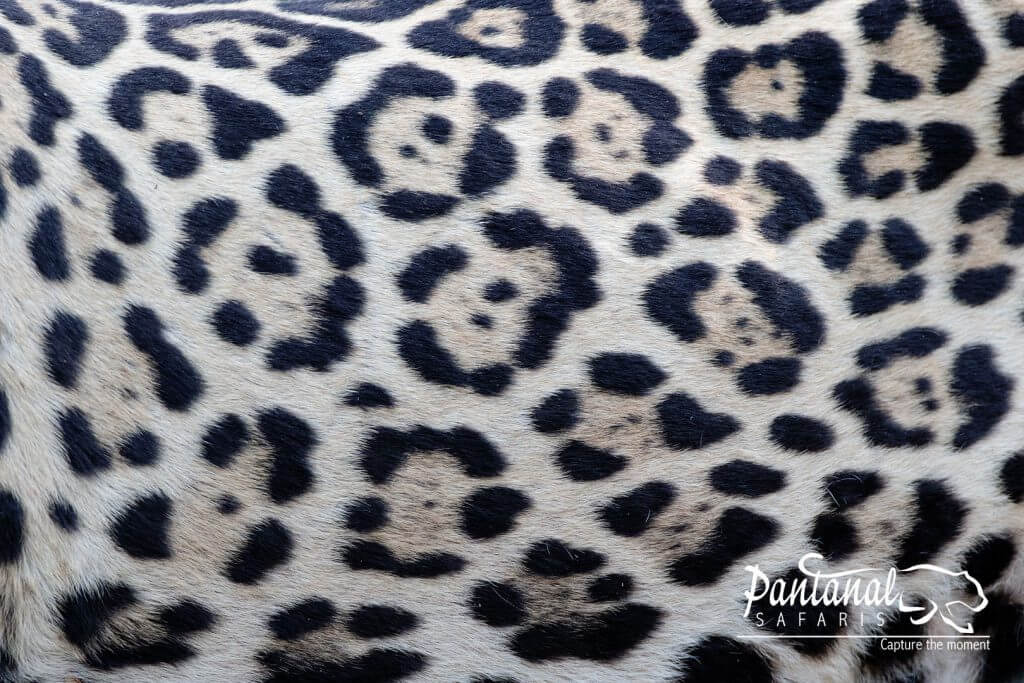 The difference between a jaguar and a leopard

The are a few differences between jaguars and leopards. Jaguars have a more compact and muscluar build. Their head is bigger and the biteforce more powerfull. The jaguar has a shorter tail compared to the leopard. We can distinguish the species looking at the rosettes. The jaguars rosettes have spots inside of them. The image on the left portraits the coat of a jaguar.

Is a black panther the same as a jaguar? In South America there are registrations of black panthers. It is called a melanistic jaguar. It is the same species but due to a more dominant developed dark colored pigment (melanine) in the skin it appears black. However when you closely study the skin/hair in bright sunlight you can still see the rosettes visible. On the right we copied the above image and put a black layer on top of it as an example on how a melanistic jaguar skin looks like.

The black panther is not only referred to for jaguars. All big cats through Asia, Africa and America with a melanistic deviation are called black panthers by the public.

It is estimated that around 6% of jaguars are melanistic . Most registrations of black panther are sighted near the Amazon. So far there are no black panther sightings registered at the Porto Jofre region in the Northern Pantanal. 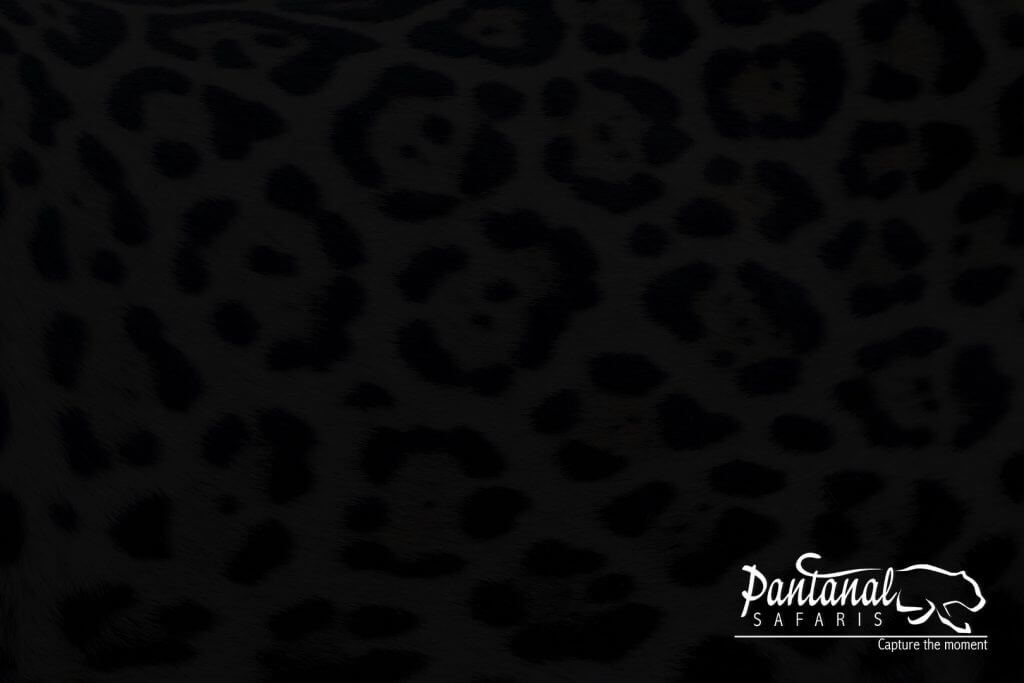 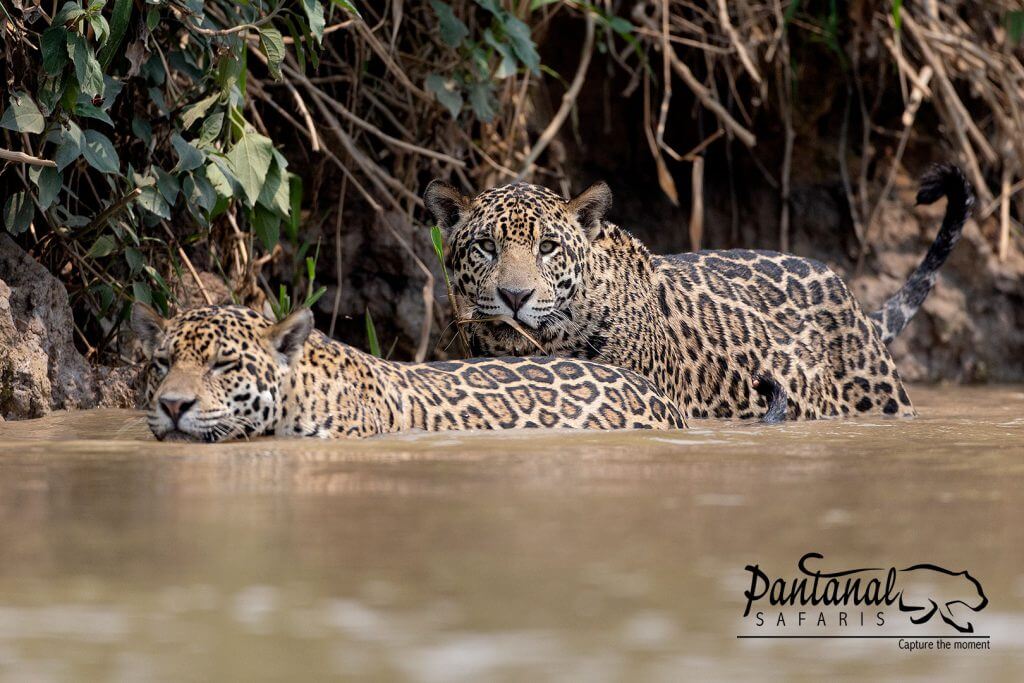 Mating season occurs all year round. When a female is pregnant the gestation takes 90-110 days and the litter size can between 1-4 kittens. Kittens normally stay around the mother for 1- 1.5 years before parting ways.

Their diet is diverse. It varies from deer, snakes, monkeys, sloths, tapirs, eggs, frogs, fish, caiman and capybara. In the Northern Pantanal they hunt mostly caiman and capibara.

The population is decreasing. The current status is “near threatened” according to the IUCN.

The following three threats are the main reason for the diclining population.

1) in South America cattle farms are popular. Cattle is an easy prey for jaguars. Frequently farmers lose cattle to jaguars and therefore hunt these cats to protect their cattle and income.

2) Illegal poaching and trophy hunting. The demand for their skins, claws, teeth is increasing rapidly, especially in Asia. Due to so preclaimed “medical / healing power”. It is used for tradtional medicine. So far there is no scientific evidence that it has any healing affects.

3) Habitat loss due to deforestation has an enormous impact on jaguars and wildlife in general. Jaguar are solitary animals and need their own territory. Habitat loss forces them out of their primary hunting grounds and territory.  Habitat loss is mostly due to cutting down trees for commercial activities and creating new farms and plantations. 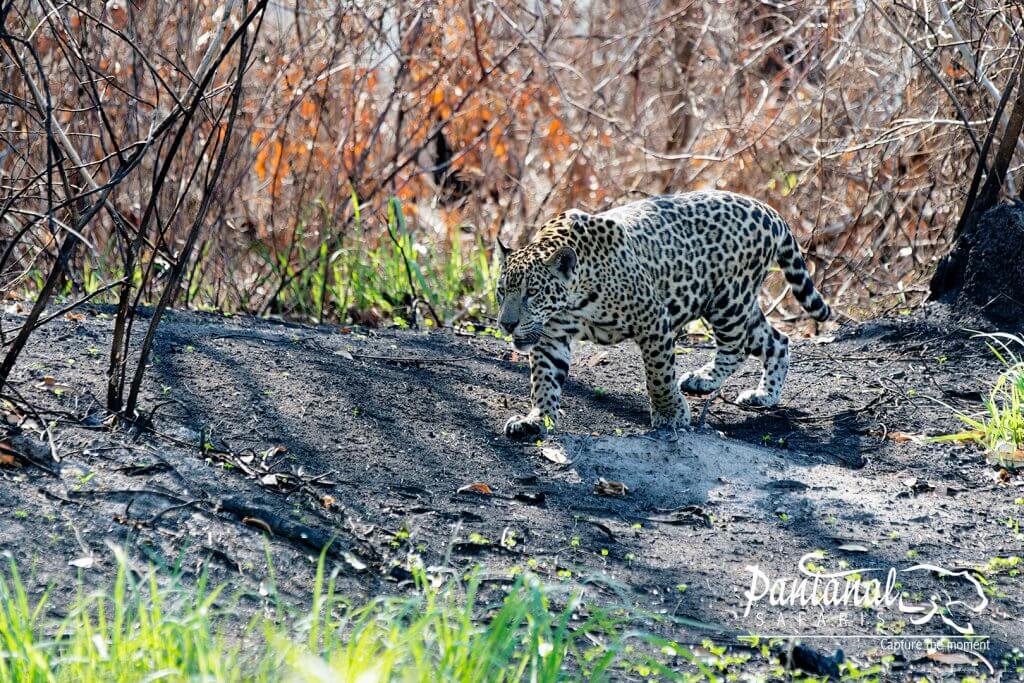 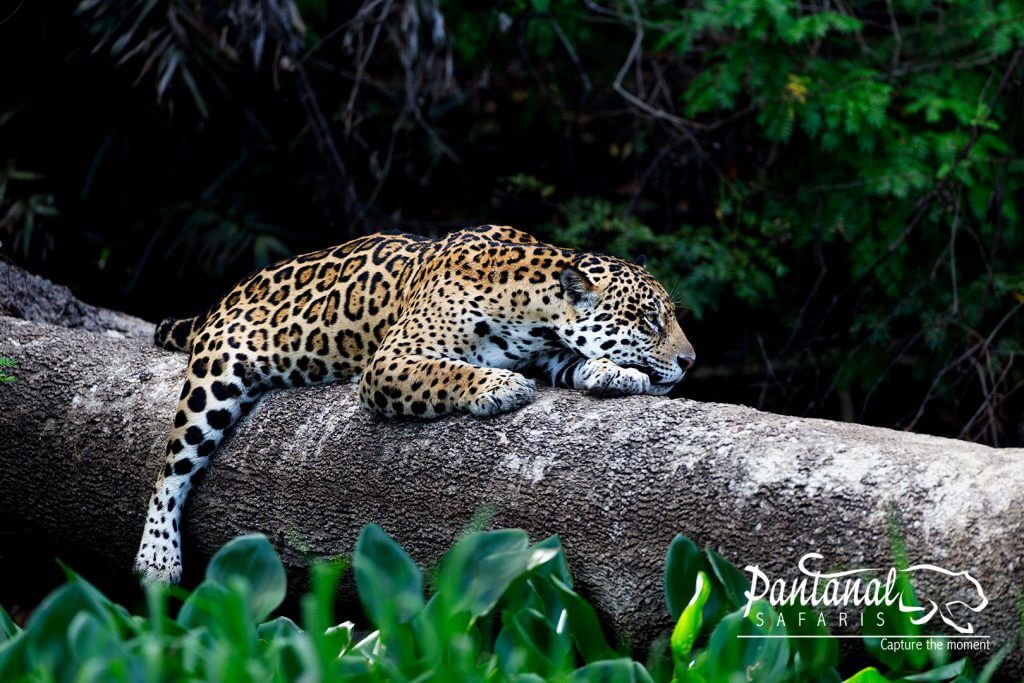 Conservation is very important and needed since the species is still in decline. The jaguar is a keystone species within the ecosystem. Within South America there are several NGO’s and private initiatives actively working on protecting and creating sustainable solutions. Through research, legislation, advisory , teaching and empowering communities they work on sustaining the future for the species.

The following initiatives are involved in conservation within the Pantanal region and some internationally. Learn more about the inititiatives and feel free to support them in any means possible.

We offer both group- and private photography tours. Our group tours have a maximum of 6-persons to ensure enough space for all clients and the cameragear.  We can tailor all programs to your specific liking, extending the duration or combine the safari with other locations in the Pantanal.

By boat we explore the vast number of small rivers and creeks in search for jaguars. 10+ hours per day we spend on the river to ensure the best possible chances on seeing and photographing the jaguar.

4 full days we will photograph jaguars in the meeting of the waters state park near Porto Jofre. Here we have the best opportunities for jaguar photography.

Hardcore jaguar photography tour. Early morning departures and 10-12 hours on the river each day to spot and photograph jaguars. We make sure you will capture the moment.